Thank you for visiting Marnie's memorial page. We'll have more information and photos to come. Please sign the guest book and add any photos or memories of Marnie. Love from the family 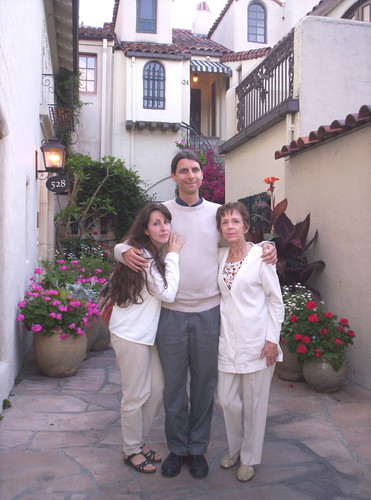 I just wanted to post a few memories of Marnie, my mother-in-law. I hadn't had a chance to see her in almost a year when she passed away. The last time I saw her, she had come out to visit Palo Alto, CA. While she was here, we wound up spending a lot of time together. She really liked Palo Alto, especially its fabulous weather, although she also discovered quickly just how tricky it is to get a cab in Silicon Valley. (Palo Alto is a great town for energetic walkers and bikers, but Marnie was neither.) We got to do some very fun things. She came to a wine tasting at Stanford's Faculty Club, which featured a lot of good wines and a nice buffet. (We managed to get away without buying anything.) She also accompanied me to a local bookstore to hear an author speak about his book on mathematics. Marnie was impressed by many interesting things going on in our area. We met up beforehand and went to a local British pub. (It was really funny how Marnie's eyes would light up at the mention of the two words, "British pub." As in, "British food and a beer. Now, why would I want to do something else tonight?) Another night, Marnie was a guest of our local Bertrand Russell Society Chapter. This group holds its monthly dinner meetings at a Chinese restaurant in Palo Alto. Marnie greatly enjoyed the philosophical conversation, and she even liked the food! Given her strong opinions on Toronto's Chinese food, this was a real shocker. She particularly liked the sauteed green beans with garlic. On another night, we were home with no dinner plans, and she suggested we get ourselves some nice Chinese takeout (delivery, actually). And yes, the green beans played a role in this plan. When we had some time to kill, I introduced her to the online game World of Warcraft. (Yes, it's true--I am in fact a nerd.) She found it quite gripping just watching me play it. (You don't think she was willing to play an online game, do you? That would have required her to USE A COMPUTER!!!) In fact, she even suggested I play it some more the next day so she could keep watching. After she went back to Toronto, she'd ask me about how the game was going sometimes when we talked, although she could never remember its name. I really liked the time we spent together while she was out here in California, and I guess that's how I'd like to remember her. She treated me then, as she had for years, like her own son, and I was deeply grateful for that. She was a wonderful woman who will be missed. With Love to Everyone Who Knew Her, Peter P.S. I'm including with this post a picture of Marnie with Rachel and me out in Palo Alto. A rare event--Marnie letting someone take her picture--and so worth remembering.

Today after close to a week of planning and mourning, we decided to get out for a bit. We went to the Distillery District and browsed through all the galleries. Without a doubt, my Mum had her favorites - Monet, Renoir, etc.. but she was always open to seeing new things. We went to many a gallery of the years. She enjoyed the Edward Burtinsky photography exhibit from a few years back. We always managed to see major art showings at the AGO. When she was in the hospital I talked about an idea to have our very own 'art classes' where we'd share ideas about various artists and then attempt to draw or paint in their style. After her first major life threatening illness she talked about taking art lessons. I was really looking forward to this exploration with her. It will be bittersweet, but I will do this ... for my own healing. While sad moments filled my heart, I felt her there with me. Especially with the warm sun on my face and seeing the leaves sprout their new spring green leaves. The circle of life. It keeps going.

Mum was a very giving person. She had a very rare disease and volunteered for trial drugs, allowed medical students to study her etc. Her wishes were to donate her body to research and to give the gift of life. In her wishes, she would want donations vs. flowers. She's feel good about continued research and aid in any of the following charities: SCLERODERMA SOCIETY OF ONTARIO TORONTO GENERAL &amp; WESTERN HOSPITAL FOUNDATION ARTHRITIS &amp; AUTOIMMUNITY RESEARCH CENTRE FOUNDATION DOCTORS WITHOUT BORDERS DONATION OPTIONS: You can donate directly to each charity, or we've set up a 'giving page' that allows you to donate directly on line without all the fuss. I believe a small portion goes to the administration for managing the site. Entirely up to you, but she would feel good knowing others would benefit from donations. OPTION 1: Donate directly to the charity - cheque, online donation etc OPTION 2: Giving Page: http://www.canadahelps.org/gp.aspx?id=4073 Thank you for continuing her legacy of kindness and giving.

It is with great sadness we share with you the news of the passing of Marion ‘Marnie’ Murray, long time resident of 35 Walmer Road – Apt 205. Our Mother lived at 35 Walmer Road over 40 years and through the years loved living in her apartment community. With a close network of friends, events in the building and daily interaction with her community, it really had a ‘small villiage’ appeal which she truly thrived in. Known for her canvassing efforts for food drives, apartment surveys, committees etc, our Mother loved connecting with the building tenants. She frequently was visited by her ‘grandchild’ Bailey the dog and she could be seen feeding her treats, taking her for walks in and around the neighbourhood. For a few summers she dappled in ‘farming’ and developed a plot of tomatoes, peas, and assorted vegetables on the property. She was a fair and methodical woman and we recently found a booklet with her notes outlining how many of her crop she shared with each person so that it was equally distributed. She loved giving in whatever way she could. During her later stages in life, it was very reassuring to know that a strong circle of friends and tenants watched over her. In a large city it’s not often that a building such as 35 Walmer Road exists. Growing up at 35 Walmer, Rachel and I have a strong connection to the building, its people, and the sense of community. While we are very saddened that our Mum is no longer with us, we are so pleased that her last remaining years were spent in the apartment with all its positive people and events. As some may have known, July 2008 our mother experienced life threathening illnesses. She was a determined woman and to the shock of doctors pulled through. We are so fortunate to have had albeit brief time with her after her illness to connect again with the building, fix up her apartment and allow our Mum to enjoy the remaining months of her life here – her home. We’ve known our mother as a kind, thoughtful and passionate person throughout her life and we know that she would want us to celebrate her life rather than to mourn it. She was a lover of life, family, friends, community, animals and small things made her happy. She touched the lives of many and will be forever remembered for her kind spirit, strong will, beautiful blue eyes and smile. In the spirit of her wishes donations to help others to will be posted on her Memorial Website: http://en.respectance.com/MarnieMurray However small your memory of our mother, we welcome you to share with her family during a celebration of life on May 2ndat Morley Bedford Funeral Chapel, 159 Eglinton Ave E., Saturday May 2nd – 1:30 Visitation 2:30 Service 3:30 Reception With deepest thanks, Paula & Rachel

Mum had a lifelong dream of seeing alpaca's & going to the Oak Ridge morraine, SO!....in the Spring of 2008 we loaded up the car with Mum, Madeleine, Silas, Jamie & Paula and headed to a sugar bush on the Morraine. En route, we located a fabulous alpaca farm and the owners gave my Mum the opportunity of a lifetime. He toured the farm and spent a great deal of time explaining everything about alpaca's. As you can see... for one who hated photos being taken her smile is great! http://www.celestialcasaalpacas.com/index.htm

As we do all the little things to prepare for Mum's memorial, I'm reminded how many times she'd be so well organized - she'd have a little Stenographer's Notebook, would make lists - sometimes lists of lists! - and would write her notes in that lovely, looping script of hers. She'd plan Christmas dinners ahead of time, and have separate notebooks for presents for each year - and separate pages for each person and if their gift had been wrapped yet. She would have been a great project manager, and am thankful to have picked up on her good habits all these years. Going to miss you so very much, Mumster. xxx's Love, Rach